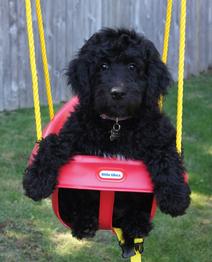 She thinks camping is ruff! 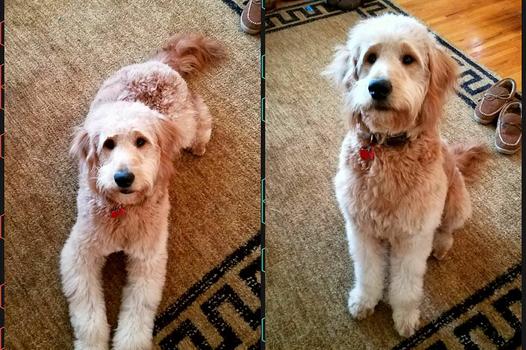 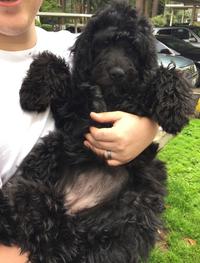 Liquorice Says hi! She doing great and loves swimming & mtn climbing. She's doing very well with her search & rescue training. She began formal training 3 weeks ago. Already doing "advanced runaway" finds. She's still so composed, tender and smart. Get's compliments weekly on both her demeanor and appearance. Such a joy!!! She's a wonderful companion!! I love her. Thanks so much for helping bring her into the world : ) 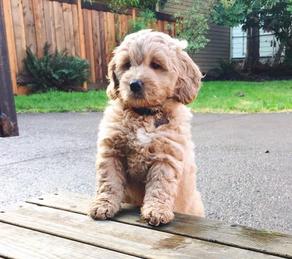 I have to say that I’m very pleased and happy with my puppy. Her temperament and looks are what I was looking for. Lola is 7 months now, she has such a calm and sweet personality. She was purple in her litter from Holly and Charlie Feb 2018. Here’s a picture of her.

Just thought I'd give you an update on how Towser is doing.

She's 40lbs now & was spayed today. Everyone that meets her completely falls in loved with her. In a few weeks she starts more obedience training. That should be fun.

Last week Towser & I took a mini vacation & since I was puppy sitting Ringo, he got to go too. They really enjoyed their first hiking experience!

I am so happy with her personality. She's even starting to find her voice!  Lol

Thanks for raising such great puppies!
Erica

The trainer at Wonder Puppy this morning said he was an ‘unfair example’ when using him as a model for training in class because he catches on so quickly and does it so well. She didn’t want the other puppy parents to feel discouraged when theirs took more work ;)
She was having him lay down with no hand signals or words and he would quickly figure out what she wanted whether she was sitting, squatting or even standing.
She also commented on Bogey being such a perfect combo of temperament, smarts and genetics. He’s really awesome.

John and Sharon,
I wanted to share this picture with you two of Maggie. She has grown so much in the 6 months we have had her. We love her more than words could describe (I mean come on, look at that face 😍)! We just wanted to say thank you for letting us adopt this perfect pup. She is so happy all the time, is incredibly well behaved, and just makes our lives richer.

Morty is doing great! He's adjusting to his new home really well. At first he was a bit shy but now he feels completely comfortable and gets along great with our other dog Stella. He was pretty much fully potty trained by the time he got here so thankfully we have had very few accidents! We took him to his first vet appointment and he is a healthy, happy pup. We are starting puppy classes within the next week or two so we are looking forward to that. We absolutely love him - he is too cute :) Thank you for raising such an excellent doodle!
Take care,
Alex & Robin 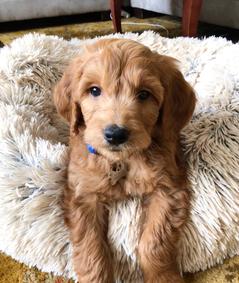 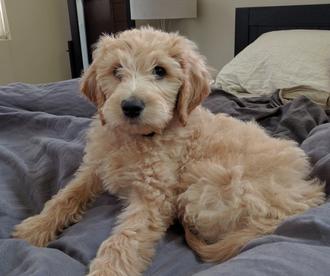 Thank you so much for what you do! Cleo is my world! She's getting so big! Having a great time at school keeping me busy wouldn't have it any other way!  ❤️ — at Washington State University.
Taylor 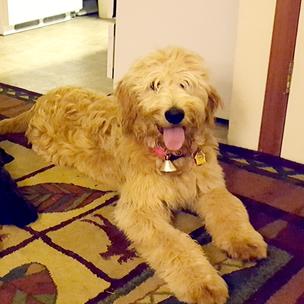 Everything is going better than expected! Bleu's quite the chewer, but he's starting to learn what is and isn't appropriate to chew on. He's pretty much fully potty trained and is good about letting us know when he needs to go. Crate training has been a breeze. I've also taught him to sit and stay, and to wait for the treats to come to him rather than him going to the treats. I'll send some pictures on Facebook tomorrow! I do have video evidence of the sitting and staying because no one believes me when I tell them my two month old puppy is this smart, so I'll send that tomorrow too.

One week in with our Cricket and we are in LOVE! She's smart, healthy and about as well behaved as an 8 week old puppy can be. She's great with "sit" and "lay down", is trying to get her cat brothers to love her, and has been amazing with potty training and crate training. She's spent two full days at work with her dad, and did great with the loud noises and people in the glass shop. The best part is that she's the only dog I've ever known that I'm truly not allergic to. Thanks for everything you've done for our dream puppy! 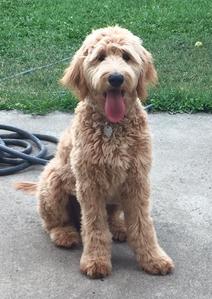 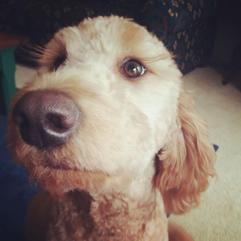 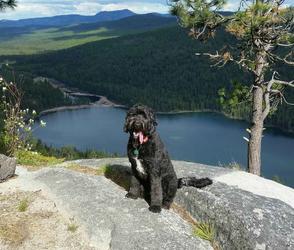 Hi John & Sharon
Jeter is doing great.  He's very playful and a sweet boy.  Everyone who meets Jeter thinks he's adorable and comments on how soft his coat is.  Jeter is very good with meeting new people & other dogs and going to new places.  He loves being outside and rolling around the grass.  Jeter is currently learning to sit, lie down and come.  He's found a couple of fave spots to lie and nap around the house.  We are very lucky to have him.
Teresa

Wanted to send a quick update about Buko. He's graduating puppy kindergarten class and the trainer put me aside and mentioned Buko has excelled the most in class! She also mentioned that she will be getting your information (which I'm sure would not be a problem) as she's considering a doodle as well!  It wasn't until recently that our family truly understood how lucky we are to have him! There was another doodle owner in his puppy class who just isn't as calm, mellow and responsive as Buko is. 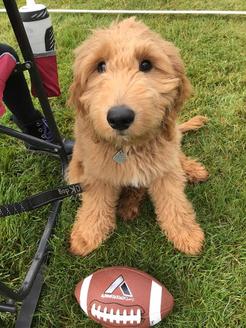 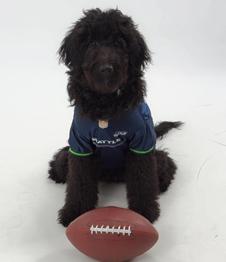 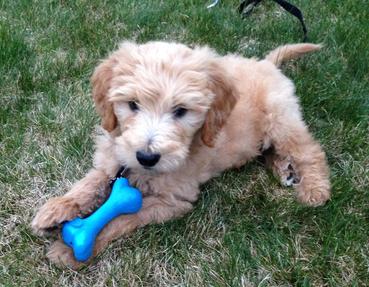 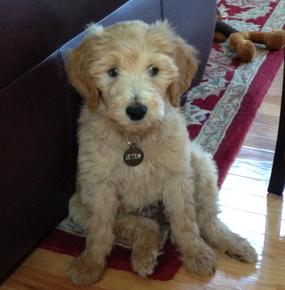 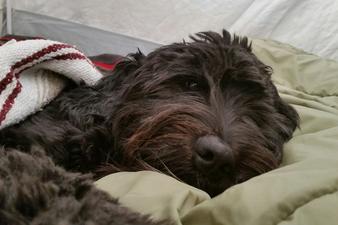 Things are going great! Levi (the puppy) has been fully bell trained for going to the bathroom outside since last week, he knows sit and lay down, and he does well sleeping through the night! He's in great health and has been on schedule with the vet for his vaccinations. He's very well behaved at such a young age and has met a few dogs already (fully vaccinated, owned by family members, in a controlled environment) that he plays well with. We're extremely happy with him.

Hard to believe its been a year since we picked this sweet girl out. All she has to do is bat those gorgeous eyelashes at us and we melt. We couldn't ask for a more perfect dog.  <3

It's going very well. My husband and I love having Ringo around and he's already been to work with me this week (he's going to be a therapy dog) and has done wonderfully! Will post pix on Facebook.
He has been able to spend some time every day with his half sister Towser and enjoys tumbling about with her lots!
Ringo had his puppy wellness checkup yesterday and passed with flying colors and is scheduled for his second set of shots on the 20th.