WHICH DOGS GET IT? Although the virus can attack dogs and puppies of any age, it is most commonly found in dogs under one year old. The highest incidence is seen in puppies 6 to 24 weeks old. Generally, puppies are protected through maternal immunity up to about 6 weeks. Many adult dogs are immune because they were either vaccinated or exposed to the illness when they were young. Several studies suggest that certain breeds, including Dobermans and Rottweilers, may be more susceptible to the disease than other breeds. Studies also indicate that unsterilized animals may be at greater risk than those who have been spayed or neutered. (Animals who have been spayed or neutered are more likely to have been vaccinated and are less likely to roam, thereby reducing their chances of coming in contact with the virus.)

HOW IS PARVO PREVENTED? The best way to help prevent dogs from getting parvo is to vaccinate them against the virus and keep them under control; dogs allowed to roam are more likely to come into contact with the virus. Shelters can prevent an outbreak by instituting a vaccination program; ensuring that their kennels are disinfected with a product proven to kill viruses; carefully evaluating and monitoring all animals; minimizing “fomite” transmission; and educating staff and the public about the disease.

WHAT IS PARVOVIRUS? Canine parvovirus, or “parvo” as it is commonly known, is a virus that usually attacks the canine intestinal tract (canine parvovirus enteritis) and, in rare cases, the heart (myocarditis). First identified in the late 1970s, the virus is one of the most resistant known; it is able to withstand heat, cold, and most common disinfectants.

HOW IS IT TRANSMITTED? Parvo is transmitted through the feces and vomit of infected dogs and puppies.  The virus can live in feces for about two weeks and can exist in the environment (such as on floors or cages) for many months. Because it is so difficult to kill, the virus is easily transmitted by “fomites” such as the hands, clothing, or shoes of anyone who comes in contact with it. 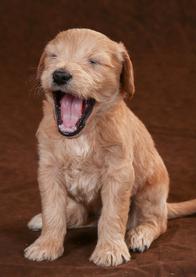 WHAT ARE THE SIGNS? Signs appear after the disease’s incubation period. The incubation period can last from  3 to 12 days after exposure but usually occurs within 5 to 7 days of exposure. The initial signs of parvo include loss of appetite, vomiting, dehydration, lethargy, fever, and depression. These are often accompanied by malodorous gray- or yellow-colored feces or diarrhea streaked with blood. Some dogs infected with the virus exhibit no symptoms and never become ill, while others show a few of these signs and recover quickly. Some, however, become severely ill, and succumb within 48-72 hours after first exhibiting symptoms

Your goldendoodle puppy will already have its 6 week shots, Dewclaws removed, De-wormed and Vet wellness checked.